Well that's all fine and dandy but why do you grow your own vegetables?  Why not just buy them from the grocery store?  My local grocery store has plenty of green stuff that I'm told are those fancy "vegetables" you speak of, isn't it the same thing?

Wow, you guys and gals are all pretty loud as you read this blog, I can hear you way over here.  That is a great question though so thank you for asking!  Yes, your local grocery store likely has plenty of vegetables that are probably pretty reasonably priced.  If you take one of these vegetables and put it directly next to the exact same vegetable that I've grown they will probably look identical, the one that I've grown might even look worse than the store bought vegetable!  Don't let this scare you and don't judge a book by it's cover.  The true test is in the taste, if you do a taste comparison of these vegetables the difference is going to be starkly different despite the fact that it's the same vegetable!  Home or locally grown produce is going to have an enjoyable flavor explosion whereas your typical grocery store produce usually tastes like cardboard.  The proof is in the pudding as they say.

The general reasoning for this is really quite simple, your store bought produce is from all across the country as well as the world.  In order for this produce to be sold from the store before it spoils it's normally picked before it's ripe, boxed up, put in trucks where this food continues to ripen, then sits on the store shelf for a few days or longer before it's bought.  The picking before it's ripe keeps precious nutrients out of the vegetable (or fruit) that it needs to keep on developing and ripen properly.  Have you ever noticed how vine ripened tomatoes taste quite a bit different and better from other tomatoes that were picked prematurely?

Who Am I Anyways?

I can already hear you talking to yourself saying:


It looks and sounds like this guy has had luck growing his own food, who is he anyways?  Surely he has lots of agriculture experience to be able to pull this off?

My name is James, I'm 32 years old, I'm from Colorado, I live in Longmont, Colorado and I'm a plant-a-holic (or veggienaut?).  I have absolutely zero formal agriculture experience nor did I grow up in an environment where we grew a lot of plants.  Before I owned a house I lived in various apartments for quite a while, I would occasionally get house plants or try and grow plants / vegetables on the porch.  Any plant I touched would promptly die fairly fast, even the so-called "impossible to kill" houseplants would perish time and time again despite my best efforts to keep them alive.


Quite a lot has changed since then:

Hello, I Grow My Own Food!

Stranger:  Your backyard is only vegetables?!  Seriously?

Me:  Well there is a shed back there, the borders are mostly sunflowers, there’s a strawberry patch, two compost piles, and a fire pit but yeah, everything else is all vegetables.

Stranger:  Ssssoooo, you live out in the country then with lots of land?

Me:  Nope, I live in the city, the property itself is just shy of a quarter acre (9,000 sq. ft) but my house is on that property.  The front yard is all wildflowers with the backyard being the main urban farm full of vegetables.  I’m almost to the point to where I’m only eating the vegetables that I’ve grown, year-round.

Stranger:  You’ve got to be kidding.

I pull out my phone and show them the most recent photo(s).

That’s a pretty typical, initial exchange that I have with people as they find out what I’ve been doing with my urban farm experiment over the past three years.  My name is James, I live in Longmont, Colorado, I don’t have any sort of formal agriculture experience or training and yet I’m able to grow the vast majority of the food that I eat, all grown at a typical house in the U.S. 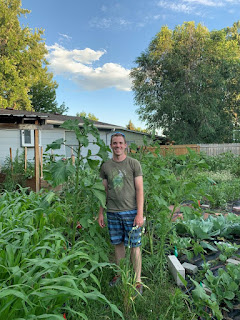